The weatherman forecasted rain for our early-May backpacking trip to Hoosier National Forest. A few less-determined people canceled the trip because the weather wasn’t to their liking.

Thursday afternoon we drove away from the threatening rain in Illinois into the blue skies of southern Indiana. Fourteen hikers gathered at Yellow River State Park, had an interesting dinner in Nashville, and got to know each other around a campfire.

One of the four newbie backpackers, (we’ll call him Bob.) kept us entertained with jokes and his story about his medical condition . . . after open heart surgery two years ago, only 30% of his heart function remains. He assured us that he’d trained well by biking and hiking.

Friday we parked at a secret trailhead and hiked into Hoosier; up one ravine and down another, again and again. We took the mud as a good sign there’d be water in the creek at our traditional camp site. The mud also made the hike into a slippery, ankle-challenging ordeal, especially for Bob and the 25-year old student (we’ll call him Mike) who arrived with 45 pounds of borrowed equipment, a sleeping bag the size of a hay bale, and a quart-bottle of sangria. Mike’s girlfriend had an equally massive load but a bigger sense of adventure.

Storms over the past two years toppled trees all along the 7.8-mile trail. We climbed through, over, under and around dozens of trees. The trail was overgrown and unmaintained. We missed several intersections. Thank goodness for GPS and experienced leaders.

With the newbies shepherded by the official sweep in the rear, the group hiked four or five hours along the circuitous into Bad Hollow, a great campsite unmarked on current maps.

Clouds moved in as we prepared our dinners, but the drizzle didn’t drive us away from the campfire until it was time for bed anyway. The pitter-patter of rain on the tarp lulled me to sleep in a matter of seconds.

A light drizzle continued off and on Saturday, but was pleasant to hike through as we explored the backcountry, identified wildflowers, and searched for morel mushrooms. Bob wisely chose to remain in camp to rest.

During our ten-mile walk-about, we wandered too near a paddock of mares. The stallion was loose and made two charges at us to scare us off. It worked. 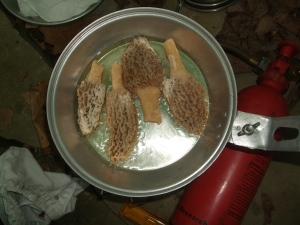 Our morel hunt was successful. We returned to camp to fry up the delectable appetizer. The rain got more intense after dinner, but quieted down to let us warm ourselves at a roaring campfire. The sky opened up at about 9:00 PM and didn’t let up until we left Indiana.

Sunday morning we wrung out our tents, tarps, and clothing and packed up. Our backpacks weighed considerably more with the water weight. The hike out was a slow slog through muddy trails, creeks, and ravines.

Our trip leader figured out a bail-out point for Bob. After an hour of hiking, we left Bob, a buddy, and their backpacks near a backroad and continued another three-hours to the cars. A good choice. The trail was tough, but we made the hike in record time because no one wanted to dawdle and chance getting hypothermia. The new hikers had to keep up. Everyone was drenched because nearly all types and brands of rain gear eventually failed.

When we drove back to find Bob, he was drenched, too. He had failed to erect the tarp he’d been given for the three hour wait on the side of the road.

A wise old man said, “There’s no such thing as bad weather, only a poor choice of clothing.” It’s true. At 54 degrees, I was soaked to the skin, though comfortably warm as long as we kept moving. I wore a silk base layer and a Frog Togs jacket. My heavy boots and Smartwool socks kept my feet dry except for the last stream crossing, ten minutes from the parking lot. In the car I immediately stripped off all the wet stuff and, proud of planning ahead, changed into my dry stash of clothing.

I’m very happy with my gear choices for what could have been a disaster of a weekend. Instead, the trip was a fun challenge. Not for everyone, of course. Mike’s girlfriend will be back, but not Mike. 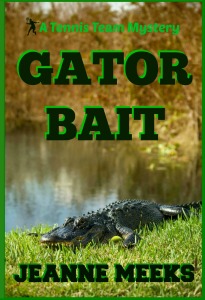 Writing Words With the Tips of My Toes